Perfect Pita
Location: Two carts, one on Library Mall and one on Capitol Square on Martin Luther King Jr. Blvd
By: Kailey

Another quest for a food cart new to the scene this year lead me to Banzo, a cute green cart staffed by cute workers. I heard about this cart long before I saw it person. Banzo has received some favorable media coverage with both the Isthmus and Badger Herald singing its praises. (It helps that Banzo has a nice website that provides all this information for you.) I had even heard through the street eating grapevine that Banzo is better than Med Cafe, a State Street staple restaurant with incredible Mediterranean food. Me and my fellow Street Eaters laughed this off. Better than Med Cafe? Yeah right. Not possible.

I stepped up to the already famous lime green cart, mulled my many options and ended up with the classic “The Banzo” pita sandwich for $6. You can order it as a platter with rice, hummus, chopped salad and pita bread for an extra $2 but I wanted to take part in the pita sandwich box phenomenon. They serve the pita sandwiches in these boxes that are portable AND the top rips off the box so you can eat your pita in peace…not pieces. Yes it’s geeky to get excited over a box, but seriously, the boxes are genius.
All the good press wasn’t wrong – my lunch was delicious. It was amazing. I would even go as far as mind-blowing. I took a bite and I made noises. I moaned. In front of people. This is not entirely unusual, I often profess my love for my meals, but this was right up there with the out of this world breakfast sandwiches at Marigold. The falafel was perfectly cooked, crunchy on the outside and exploding with incredible flavor on the inside. Don’t take my word for it – I allowed my self-professed falafel know-it-all pal take a bite of one of the falafel balls: she confirmed, this was damn good. The best she’s tasted since Israel (I told you, she’s the falafel pro). Also tucked into my adorable whole wheat pita were crispy chips, hummus, a handful of salad, pickles and a hearty mix of three sauces (tahini, yogurt and hot sauce). Something very unusual for me – thanks to the fancy box I didn’t use any napkins. 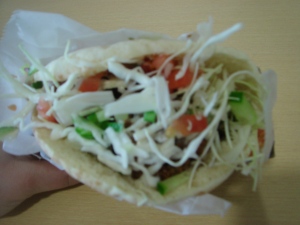 I was satisfied with the amount of food I ordered, it wasn’t too much, it wasn’t too little. Like Goldilocks, I found the just right pita sandwich and I didn’t feel like garbage after eating it because the ingredients were light and fresh. Banzo clearly knows what they’re doing and will fare well in the food cart scene. They even have gluten free and vegan options meaning everyone can partake in a Banzo meal. While I’m not ready to banish the Med Cafe chicken akins plate from my lunchtime options, I’m jumping on the Banzo bandwagon along with the rest of Madison.
Deliciousness: 5/5 plates
Price: 5/5 plates
Speed: 5/5 plates
Authenticity/Originality: 5/5 plates
OVERALL: 5/5 plates